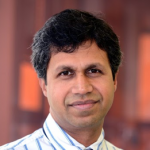 Upul Wijayantha graduated from University of Ruhuna, Sri Lanka in 1993. He read his MPhil at the Institute of Fundamental Studies, Sri Lanka between 1994-1997 with Professor Kirthi Tennakone. Then, he was awarded a PhD from University of Bath, UK in 2000 for the work he conducted in the area of semiconductor photoelectrochemistry with Professor Laurie Peter. After spending another 3 years as a postdoctoral fellow in the same research group in Bath, he joined Hydrogen Solar Ltd to develop the photoelectrochemical water splitting technology for production of hydrogen using solar energy. In 2007 he moved to the Department of Chemistry in Loughborough University to take up a Lecturer position. He was promoted to a Senior Lecturer in June 2010 and then to a Personal Reader in July 2012. Most recently, he was promoted to Professor of Physical Chemistry in September 2014.